Dr Dilip Mahalanabis, the pioneer of ORS Therapy, passes away 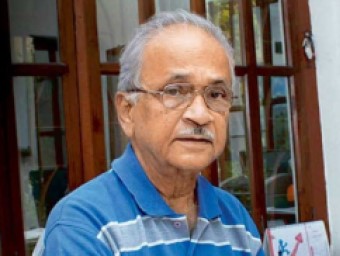 Dr Dilip Mahalanabis was working in overflowing refugee camps during the 1971 Bangladesh Liberation war when he came up with ORS, which The Lancet called "the most important medical discovery of the 20th century".

Dr Mahalanabis, 87, was suffering from lung infection and other age-related ailments, the Press Trust of India (PTI) reported.

India-made cough syrups and deaths in Gambia: what we know so far According to the World Health Organisation (WHO), diarrhoeal diseases, such as cholera, are among the leading causes of mortality in infants and young children in many developing countries, where the patient dies of dehydration. ORS, a combination of water, glucose and salts, is a simple and cost-effective method of preventing this.

Dr Mahalanabis was working in overflowing refugee camps during the 1971 Bangladesh Liberation war when he came up with ORS, which The Lancet called “the most important medical discovery of the 20th century.’’ From 1975 to 1979, Dr Mahalanabis worked in cholera control for WHO in Afghanistan, Egypt and Yemen. During the 1980s, he worked as a WHO consultant on research on the management of bacterial diseases.

In 2002, Dr Dilip Mahalanabis along with Dr Nathaniel F Pierce was awarded the Pollin Prize by Columbia University (considered the equivalent of Nobel in peadiatrics).

“His death marks the end of an era. Oral rehydration is still the mainstay of treatment for diarrhoeal diseases in children. Before the use of ORT, the only treatment was intravenous fluid infusion, which was neither cost-effective nor easy. Due to Dr Mahalanabis’s persistent efforts, ORT was made a household name,” said Dr Sampada Tambolkar, professor of paediatrics at Dr D Y Patil medical college, Pune.

We explain the story of the doctor and his discovery that saved millions of lives. Born on November 12, 1934 in West Bengal, Dr Mahalanabis studied in Kolkata and London, and joined the Johns Hopkins University International Centre for Medical Research and Training in Kolkata in the 1960s, where he carried out research in oral rehydration therapy.

When the 1971 war broke out, millions of people from then East Pakistan took refuge in India. Clean drinking water and sanitation were problems at these refugee camps, and cholera and diarrhoea broke out among people anyway exhausted and dehydrated. Dr Mahalanabis and his team were working in one such camp at Bongaon. Stocks of intravenous fluids were running out, on top of which there weren’t enough trained personnel to administer the IV treatment.

From his research, Dr Mahalanabis knew that a solution of sugar and salt, which would increase water absorption by the body, could save lives. He and his team then prepared solutions of salt and glucose in water and began storing them in large drums, from where patients or their relatives could help themselves.

Dr Mahalanabis later wrote in WHO’s South-East Asia Journal of Public Health about that period in 1971, “Available resources for the treatment of cholera were mobilised but basic handicaps still existed. The huge amounts of intravenous fluids that would be required, plus the problems of transport and lack of trained personnel for their administration, represented an almost insurmountable logistical problem in treating cholera effectively under such circumstances by the standard methods currently in use. We suggested the use of oral fluids as the only recourse in this situation.”

To convince people the new treatment would work, they were told it was an oral form of saline. “The oral solution that we elected to use consisted of 22 gm glucose (as commercial monohydrate), 3.5 gm sodium chloride (as table salt) and 2.5 gm sodium bicarbonate (as baking soda) per liter of water. This was the simplest formula, containing the minimum number of ingredients, previously found to be effective in severely ill patients with cholera,” Dr Mahalanabis wrote.

In another article from the Bulletin of the WHO carried by the USA’s National Library of Medicine, Dr Mahalanabis is quoted as saying, “Within two or three weeks, we realised that it [ORS treatment] was working and that it seemed to be all right in the hands of untrained people… We prepared pamphlets describing how to mix salt and glucose and distributed them along the border. The information was also broadcast on a clandestine Bangladeshi radio station.”

Soon the fatality rate in Dr Mahalanabis’s camp was down to 3 per cent, compared with the 20 and 30 per cent in camps that used only intravenous fluids. Dr Dhiman Barua, head of the Bacterial Diseases Unit of WHO, visited the camp managed by Dr Mahalanabis, and started popularising the ORS method of treatment.

While initially, the medical fraternity was septical, the WHO eventually adopted ORS as the standard method for treating cholera and other diarrhoeal diseases. Today, the WHO recommends a combination of sodium chloride, anhydrous glucose, potassium chloride and Trisodium citrate dihydrate as the ORS formula. In India, July 29 is observed as ORS Day.

“One of the advantages with ORS is that even untrained people can administer it and keep the crisis in check till the patient is admitted to the hospital. It contains electrolytes in right proportions and is given to babies and adults suffering from diarrhoea. This low-cost solution for a very common problem was pioneered by Dr Dilip Mahalanabis,” Dr. Sameer Desai, Pediatric Orthopaedic Surgeon and consultant at Pune’s KEM hospital, said. Using ORS.

The Union Health Ministry has popularised guidelines on preparing and using ORS available in powder form at health centres and chemists. The guidelines, available at the India Health Portal site, advise that contents of the ORS packet should be mixed with the correct amount of water in a clean container. This is important, because too little water could make the diarrhoea worse, the government cautions.

Also, the ORS must be added only to water, and not to milk, soup, fruit juice, or any soft drink. Sugar should not be added to the solution.

After stirring well, the solution should be given to the child from a clean cup, and not a bottle.

The National Health Portal gives a step-by-step guide to preparing formulation at home as well. Six level teaspoon full of sugar (1 spoon = 5 g) and half a level spoonful of salt should be mixed with a litre (five 200-ml cups) of clean water), and stirred until the sugar and salt dissolve.

“The home-made solution is adequate in most cases and is very effective for rehydration,” the National Health Portal says. It cautions: “Be very careful to mix the correct amounts. Too much sugar can make the diarrhoea worse and too much salt can be extremely harmful to the child.”

The ORS solution should be covered and not kept for more than 24 hours, due to the risk of bacterial contamination, the portal says.