Monkeypox Enters India, Covid Surges Again. Are We on Way to Another Health Crisis? 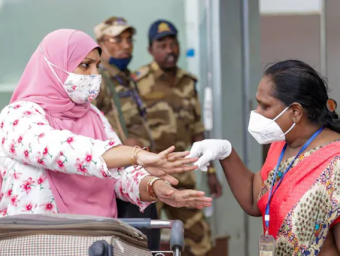 Right when the world seemed to be coming out of the Covid pandemic, or getting used to it maybe, another threat, monkeypox, is now in contention to spread into a public health emergency.

While the World Health Organisation (WHO) has so far maintained that monkeypox spread is not alarming and nowhere closed to being declared a pandemic, the health body is going to decide today whether the outbreak that is currently present in some countries should now constitute a global health emergency — the highest alarm it can sound.

Talking about the status of Covid-19 pandemic, while vaccines have managed to tame the infection wildfire and bring hospitalisations down across the globe, some countries like Japan, China, Australia, New Zealand etc., are currently battling a surge in cases.

Covid-19 has not really vanished completely and doesn’t look like it is going to happen anytime soon. However, with better treatment, new drugs coming and vaccines doing their job, countries have managed to calm down the fury of the virus that has seen over 57 crore confirmed cases and taken 63.8 lakh lives since it was first reported.

Monkeypox Cases So Far & Situation in India
As per latest WHO figures, around 14,000 cases cases of monkeypox have now been reported from more than 70 countries and territories, while five deaths, all from Africa, have also been recorded.

Most cases still continue to be reported from Europe, primarily among men who have sex with men, WHO said.

In India, too, the central government has directed screening of all international travellers arriving in the country after the detection of first two cases, both of which are from Kerala.

Kerala reported the first monkeypox case after a 31 year old man who returned from the UAE on July 12 tested positive. All his contacts were identified and 11 of his co-passengers, his family members, an auto-driver, a taxi driver and a dermatologist of a private hospital, where the infected person sought treatment first, are under observation.

On July 18, Kerala govt informed about the second confirmed case of monkeypox in the state. The person landed at the Mangalore airport in coastal Karnataka from Dubai on 13 July. He was admitted to a hospital after he exhibited symptoms of the disease. His samples were sent to NIV Pune and they tested positive for monkeypox.

On Monday, 18 July, the Union Ministry of Health and Family Welfare said that they had reviewed the functioning of health screening of international travellers arriving in India at airports and seaports.

Can Monkeypox Bring Another Covid-Like Crisis?
While the thought of an infection spreading across countries after two years of Covid may be scary, it is important to highlight here that monkeypox is not new. Monkeypox is a virus that originates in wild animals like rodents and primates, and occasionally jumps to people. Most human cases have been in central and west Africa, where the disease is endemic.

Monkeypox can be spread in two ways: from either an infected animal or a human carrier of the virus. Animal-to-human transmission can take place through broken skin caused by bites or scratches or through direct contact with an infected animal’s blood, bodily fluids or open sores.

Similarly, but less commonly, monkeypox is spread from person to person on skin-to-skin contact with an infected individual who has open sores or scabs. One can also transmit the virus through respiratory droplets and oral fluids. Moreover, one can get infected if they come in contact with contaminated materials used by an infected person or animal, like clothing, bedding, shared sex accessories and other linens or fabrics.

As per WHO experts, majority of cases this year have been identified among men who have sex with men (MSM), however, it should also be recognised that anyone can contract monkeypox, not just MSN.

Is Monkeypox Easily Treatable? What About Vaccines?
Monkeypox belongs to the same virus family as smallpox but causes milder symptoms. Most patients only experience fever, body aches, chills and fatigue. People with more serious illness may develop a rash and lesions on the face and hands that can spread to other parts of the body.

The incubation period is from about five days to three weeks. Most people recover within about two to four weeks without needing to be hospitalized.

Monkeypox can be fatal for up to one in 10 people and is thought to be more severe in children. People exposed to the virus are often given one of several smallpox vaccines, which have been shown to be effective against monkeypox. Anti-viral drugs are also being developed.

As per health experts, monkeypox is unlikely to create a scenario similar to that that was created after the outbreak of Covid-19, even as more cases are found.

WHO Technical Lead on Covid, Dr Maria Van Kerkhove, said while more cases of monkeypox are expected as surveillance is expanded, it is not going to be like Covid-19

“As surveillance expands, we do expect that more cases will be seen. But we need to put this into context because it’s not Covid,” an NYT report quoted Dr. Maria Van Kerkhove as saying.

The virus has probably been circulating in these animals for a very, very long time, Dr Carlin said, adding that for the most part, it has stayed in animal populations.

The first human case of monkeypox was detected in 1970 in the Democratic Republic of Congo. Since then, the virus periodically caused small outbreaks, though most were limited to a few hundred cases in 11 African countries. To sum it up in simple words, monkeypox, as per experts, is unlikely to turn into something as deadly as Covid-19 primarily because it is not a new virus, its vaccines are effective and commonly used, unlike the novel coronavirus disease, caused by the SARS-CoV-2 virus, that broke out two years ago and sent the world into a tizzy trying to find out its origin.

Should We Worry About a Rising Threat?
Dr Luis Sigal, an expert in poxviruses at Thomas Jefferson University in Philadelphia, said DNA viruses like monkeypox are generally very stable and evolve extremely slowly compared with RNA viruses like the coronavirus or Ebola, the NYT report said.

Even though the scientists are trying to understand if the infectiousness, severity or other characteristics of the virus have changed based on genetic sequences collected from some patients, Dr Sigal said his expectation is that they will not be any different.

A second meeting of the WHO’s emergency committee on the monkeypox virus will be held today to examine the evidence on the worsening situation, with nearly 14,000 cases reported so far.

On June 23, the WHO convened an emergency committee of experts to decide if monkeypox constitutes a so-called Public Health Emergency of International Concern (PHEIC) — the UN health agency’s highest alert level.

But a majority advised the WHO’s chief Tedros Adhanom Ghebreyesus that the situation, at that point, had not met the threshold.

Now a second meeting is being held to decide whether monkeypox spread should be declared a public health emergency, with case numbers rising and spreading to six more countries in the past week.

If the committee advises Tedros that the outbreak constitutes a PHEIC, it will propose temporary recommendations on how to better prevent and reduce the spread of the disease and manage the global public health response.