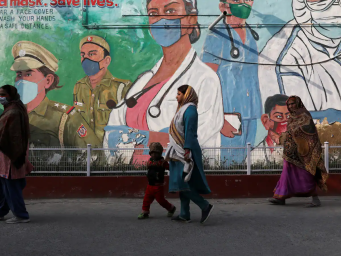 The Indian health system is ready to take a load of around 2-4 lakh cases every day if infections due to Covid-19 start escalating in the coming months, the head of India’s top panel on coronavirus vaccines told News18.’

In an exclusive conversation with News18, Dr NK Arora, head of the National Technical Advisory Group of Immunisation (NTAGI) — an apex panel which takes critical decisions on use and deployment of Covid-19 vaccines in India — said the country is ready to handle any health-related emergency in terms of medicines, beds, oxygen cylinders and more.

“India is presently in the middle of the third wave and what we have learnt about Covid-19 is that the different variants will drive different waves. Right now, Omicron is driving the third wave in India,” Arora said, while giving the reference of last week’s announcement of the detection of BA.4 and BA.5 variants in India.

“According to the studies and reports from other countries, which have previously witnessed the waves due to these two strains, BA.4 and BA.5 have ‘growth advantage’ which means that these variants are highly transmissible when compared to other variants from the same lineage.” He added: “High quality of surveillance, extensive contact tracing and strong public health system are the keys. Today, India’s health system is ready to take the load of around 2-4 lakh patients per day in hospitals if the cases of severe disease go up.”

HOW HAS INDIA UPPED ITS SURVEILLANCE MECHANISM?
Arora explained that India has introduced the strategy of ‘sewage surveillance’ that helps in anticipating the outbreak 3-7 days in advance.

This surveillance gives public health officers a chance to focus messaging and resources to handle the upcoming cases. It is also used as a tool to sequence the virus and find new variants sooner. India has deployed this tool at more than 50 sites across the country.

As per the global experience, testing sewage provides early warning signs of increased transmission in a community. The results capture even those who are asymptomatic or not being tested. If sewage testing in a particular location starts throwing the results of increased presence of virus, it could signal a possible outbreak in the next few days. The method is commonly used to trace the presence of poliovirus, at pre-decided intervals.

DULL RESPONSE TO BOOSTER AND CHILD-ADOLESCENT IMMUNISATION
The response to booster doses is not as enthusiastic as it should have been, even in the category above 60 plus, Arora said as he blamed complacent behaviour due to the falling number of Covid-19 cases. “February onwards, the cases have been going down, leading to an increase in complacency among people. We have seen this behaviour before the second wave when people came forward to take vaccine shots only when cases started rising.”

He, however, advised citizens to take their booster shots without waiting for the jump in infection. “In case a new variant comes in, a booster/precaution dose will keep you safe and sound.” Arora said: “Till now, 97% of the adult population of India has received the first dose. Those suffering from chronic health conditions such as hypertension, cancer, kidney or liver or heart ailments or any other critical conditions such as organ transplant patients, I would request all of them to complete their vaccination schedule.”

Data shows that people with any co-morbid condition are vulnerable and their chances of death increase several fold.

“Similarly, one of our ideas behind opening vaccination drives for children was to protect the children with weak immune systems.”

The response to vaccination drives in the 15-18 age group is decent, however, it is weak in the 12-14 age group. According to data, 10-12% of children have co-morbid conditions such as congenital problems, obesity, asthma, birth defects among others. “It is very important for these children to get the vaccines as early as they can.”

‘MOOL MANTRA’ OF ‘AATMA NIRBHAR BHARAT’ PLAYED KEY ROLE
According to Arora, the top highlight of Covid-19 management was community engagement and this was by design and not by default.

Without the engagement of the community, he said, it wasn’t possible to vaccinate the entire country and win the battle against Covid-19.

“Unless 130 crore people fight together, adhere to protocols of masking, lockdown and other things apart from accepting vaccines, India had a weak chance against Covid-19.”

“Nowhere in the world, is 97% of the population (as dense as India’s size) vaccinated. It all started with right messaging and directions from the apex leadership of India.”

He emphasised that the ‘mool mantra’ of ‘Aatma Nirbhar Bharat’ played a key role as “we did not ask for even a single dose of vaccine from other countries, we were never on our knees”. “In fact, we ended up doing vaccine exports under ‘Vaccine Maitri’ and in future, will continue to do that.”

WILL MIXING OF VACCINES BE ALLOWED SOON FOR BOOSTER SHOTS?
Whatever we have deployed till now in India has been evidence based, Arora said, adding that even for mixing vaccines “we are waiting for the results of studies”.

A number of studies are being undertaken by academic houses or vaccine companies to see through the response of allowing a new vaccine as a booster instead of the same, primary vaccines. “Let us have good evidence for prescribing heterologous vaccines.”