U.S. Drug Supply Is Even More Reliant on India Than Thought 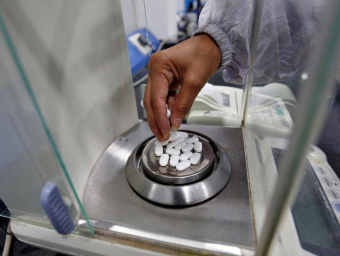 Amid the first Covid-19 lockdowns in 2020 and worries that critical drugs could run low, a 200-year-old nonprofit, little known outside the drug industry, took it upon itself to meticulously map the supply chain of medications Americans take. It was an ambitious undertaking that not even the Food and Drug Administration had tried before.

U.S. Pharmacopeia has long played a critical role in the drug industry, which relies on its chemical samples to help ensure quality. The results of its huge data-mining probe were startling: Indian factories, the data showed, provide a vast amount of ingredients that go into the generic drugs Americans take.

USP Chief Executive Officer Ron Piervincenzi says that before his organization sought to map the supply chain during the lockdowns, he was surprised by the paucity of data. “We were just frustrated—not just frustrated, truly annoyed,” he says.

Active ingredient production, the USP found, is far more concentrated in India than was previously understood given the FDA’s limited data, which had made China look like a more dominant player in the pharmaceutical supply chain than it really is. Active ingredients are what make a drug effective against a particular disease or condition.

It’s well known that Indian factories have struggled with quality issues over the years. What’s more, there’s nothing stopping the Indian government from cutting off supplies of certain drugs to protect its domestic stockpile. That’s exactly what India did early in the pandemic, when it temporarily banned the export of certain antibiotics and acetaminophen, the active ingredient in Tylenol, to ensure it had enough to meet domestic needs. Add to that India’s close ties to Russia at a time of fraught relations between the Kremlin and the West. India has expressed interest in obtaining more oil from Russia, and Prime Minister Narendra Modi has so far avoided criticism of President Vladimir Putin’s invasion of Ukraine.

“I’m not saying India is averse to the U.S.,” says Stephen Schondelmeyer, co-lead of the Resilient Drug Supply Project at the University of Minnesota’s Center for Infectious Disease Research & Policy. Yet, “they’re somewhat Russia-friendly. They have a lot of trade with Russia.”

The Biden administration recently warned about the preponderance of drug supplies that come from China and India, and members of Congress have introduced legislation to protect the pharmaceutical supply chain from what they perceive as China’s dominance of the industry. Those positions will need to be reassessed after USP’s determination that India accounts for the lion’s share of the world’s active ingredient manufacturing plants for generic drugs, which account for 90% of the drugs Americans take. USP found that brand-name drugmakers are more likely to turn to Europe for their active ingredients.

Many issues can lead to shortages but without good data on where drugs come from, large buyers, particularly hospitals, can’t anticipate them as well as they’d like. USP’s findings could change that. For a price, they can help those in charge of keeping medical centers well-stocked anticipate drug shortages and give policymakers a tool for identifying the cause of a shortage. Federal incentives could encourage the creation of new production lines in the U.S., and investment in factories in Canada and Mexico would help diversify supplies so that if a given company were knocked out, another making the same drug elsewhere could step in.

Rising transportation costs are also straining the drug supply chain, adding an incentive to bring production closer to home. In an October survey of its members, the Association for Accessible Medicines, a lobbying group, found that air cargo costs had increased an average of 227% since before the pandemic, says Jonathan Kimball, AAM’s vice president for trade. Ocean cargo costs were up 193%. Kimball said costs have probably worsened with rising oil and gas prices triggered by Russia’s invasion of Ukraine.

The industry has a lot of work to do. Of the 100 drugs Americans use most, 83 have no production source in the U.S. for their active ingredients, says Tony Sardella, a senior research adviser at the Center for Analytics & Business Insights at Washington University in St. Louis. About 75% of 52 drugs used to treat Covid that Sardella analyzed, including analgesics as well as pulmonary and cardiology drugs, don't have a U.S. source for active ingredients.

With its close ties to the industry, USP was able to gather details on what factories supply which ingredients—information that major drug companies carefully guard. USP mapped factories all over the world to determine active ingredient output for the U.S. market. Getting that wide-angle view of the global supply chain required cross-referencing 40 external datasets in what Vimala Raghavendran, who heads USP’s Pharmaceutical Supply Chain Center, says was “a massive undertaking.” That gave USP a level of detail and timeliness that far exceeds the FDA’s data. USP intends to keep its data up to date for sale to hospitals and government agencies. “Bottom line is that you can’t have a one-size-fits-all solution to this big problem,” Raghavendran says. “Our medical supply chain is not as resilient as we need it to be.”