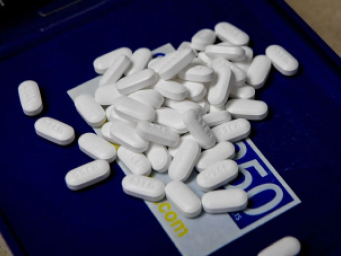 Rhode Island's attorney general on Monday announced settlements he valued at $107 million against the drugmakers Teva Pharmaceutical Industries (TEVA.TA) and AbbVie's (ABBV.N) Allergan unit to resolve claims over their roles in fueling an opioid epidemic in the state. Attorney General Peter Neronha said the settlements include $28.5 million in cash, plus the delivery to Rhode Island of anti-overdose treatments - 1 million Naloxone sprays and 67,000 bottles of Suboxone pills - over 10 years.

"While no amount of money will ever be enough to undo the harm suffered by Rhode Islanders throughout the ongoing opioid epidemic, these additional recoveries will further support public health efforts to respond to the challenges," Neronha said.

Israel-based Teva, the world's largest generic drug company, called its settlement "a critical step forward in getting life-saving treatments to the people who need them."

It said it was still "actively" negotiating a national settlement. Teva Chief Executive Kåre Schultz told Reuters last month the company will likely end up paying $2.7 billion to $3.6 billion in cash and drugs to settle all U.S. state and local government claims. AbbVie, which acquired Allergan in 2020, did not immediately respond to a request for comment.

The settlement was reached just as Rhode Island was prepared to take Teva to trial. Jury selection began last week, and opening arguments were set to begin on Monday.

The Rhode Island lawsuit is one of more than 3,300 filed by state, local and Native American tribal governments across the country accusing drugmakers of minimizing the addiction risks of opioid pain medications.

More than 500,000 people have died due to opioid overdoses in the past two decades, according to the U.S. Centers for Disease Control and Prevention.

Concerns about the value of those drugs have been a sticking point in Teva's attempt to reach nationwide settlement agreement. Hunter Shkolnik, a lawyer who represents opioid plaintiffs in other cases, called the use of the list price a "smoke and mirrors" technique that artificially inflates the settlement's value.

Vincent Greene, an attorney who represented Rhode Island in the Teva case, said the inclusion of treatment drugs will "save lives immediately and in the years to come." Rhode Island has reached all-cash settlements from other defendants, giving the state more flexibility to accept non-cash contributions from Teva, Greene added.