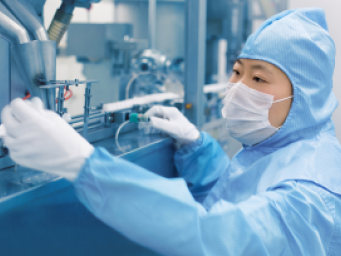 Apart from this multi-regional pivotal study, the company is also conducting two other pivotal studies in US, the Chinese mainland, Brazil, South Africa, Argentina, Malaysia, the Philippines and Ukraine etc. for treating COVID-19 outpatients and inpatients, respectively, according to Lu.

Kintor is also closely following and conducting research on the new variant Omicron that was firstly discovered in South Africa, the Global Times learned.

The company started research on the drug's efficacy against COVID-19 after they observed that the incidence of severe cases among adult male is higher than that among adult female, while children only encountered mild or moderate symptoms. Meanwhile, severe cases were comparatively less among patients who were receiving androgen deprivation therapy.

The clinical phenomenon indicated that the coronavirus might be correlated with human's androgen level. Therefore, proxalutamide as an AR antagonist might be an effective therapy to treat infections, Lu said.

The candidate has showed good efficacy and safety in investigator-initiated studies in Brazil with hospitalization risk being reduced by 92 percent and 90 percent for male and female outpatients, respectively. The drug also demonstrated 78 percent protection in mortality risk in treating COVID-19 inpatients, Lu introduced.

In terms of safety, Lu noted that the drug had proved a good safety profile in previous clinical trials of treating prostate cancer and breast cancer. Its safety would be better on COVID patients as the treatment cycle is much shorter, only one to two weeks, she said. According to our in-house research and with reputable professors in the US, proxalutamide could significantly inhibit the entry of the coronavirus into host cells by transcriptionally down-regulating the expression of TMRPSS2 and ACE2, which make it not only effective against the wide-type coronavirus but numerous following mutations like Alpha, Delta and Gamma, Lu said.

However, the unexpectedly high efficacy of proxalutamide raised doubts among some foreign media and scientists over the authenticity of the data, especially after manuscript of the Brazil study was declined by authoritative magazines The New England Journal of Medicine and The Lancet. Moreover, California-based gastroenterologist Zeid Kayali denied with Reuters that he was in charge of phase clinical trials on the drug in the US as the company revealed.

As to the refusal of the two magazines and doubts over the transparency of the clinical trials in Brazil, Lu explained that the magazine editors told the authors, i.e. the investigators of the Brazil study that they thought the data was too good so that they have to check the original data, which, however, they did not have capacity to do so.

"Instead, the investigators published the manuscript in June on the preprint platform MedRxiv," Lu noted.

Lu also explained that Dr. Kayali was one of the investigators participating in the pivotal study, though not the person in charge. The first dosing of the phase III clinical trial for proxalutamide to treat COVID-19 outpatients was conducted on April 25 in the Smart Cures Clinical Research by Dr. Nader Sobh.

"The investigator-initiated study for treating COVID-19 inpatients in Brazil was conducted in the Amazonas state, and a severe outbreak happened due to the P1 variant during study period, with an in-hospital mortality rate of 50 percent reported by the Lancet. In this circumstance, the double-blinded study recorded 35 deaths in 317 patients who received proxalutamide and 162 deaths in 328 patients who received placebo, which showed proxalutamide saved more lives" Lu noted.