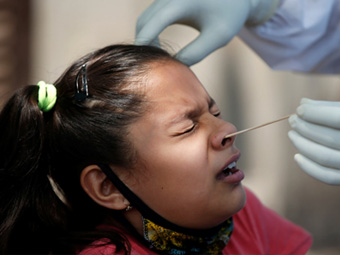 If the recommendations of a 13-member expert committee headed by cardiologist Devi Prasad Shetty are implemented by the Karntaka State government, detection of COVID-19 will just be a throat gargle away for children.

In its interim report submitted to the government, the committee, set up by the State government for assistance in controlling an imminent third wave, has recommended that throat gargle samples can be used to detect COVID-19 in children aged 6-14.

“It is difficult to collect the throat swabs in children. A study published by the Indian Council of Medical Research (ICMR) has also revealed that throat gargle lavage may be a feasible alternative to swabs for sample collection for the detection of SARS-CoV-2,” Dr. Shetty told The Hindu on Sunday.

Confirming that the committee has submitted its interim report to the government, Dr. Shetty said the virus was predominantly likely to target children the most during the third wave since most adults may already be infected or immunised by the time it arrives. “As of now, we do not have the required infrastructure to handle paediatric cases. Instead of scrambling at the last moment, it is better to be prepared,” he said.

Estimating that nearly 3.4 lakh children aged up to 18 years were likely to be hit by the peak of the third wave in the State, the committee has recommended a slew of measures to combat the possible third wave.

Sources in the committee said the demand for paediatric beds at peak level during the third wave was likely to touch 23,804 in hospitals. “While 6,801 ICU/HDU beds may be required to treat the infected children, 43,358 COVID Care Centre beds will also be required,” one source said.

A different challenge
The committee has highlighted that managing children with COVID-19 in an ICU is completely different to handling adult patients. “Adults can take care of themselves, provided they are given the required support such as oxygen supply. However, children cannot be left alone with the nurses and doctors. There is a need for a separate treatment protocol for children and it may be necessary to allow a parent to stay with the child in the ICU,” one of the members pointed out.

He said the existing high-end ventilators procured during the first and second waves could be adjusted for paediatric use. “There is not much of a difference, except for the size of consumables and circuits. However, neonatology ventilators cannot be used for both children and adults,” he explained.

C.N. Manjunath, nodal officer of labs and testing in the State’s COVID-19 task force, said with the third wave expected in October-November, it is highly recommended that vaccination for children should begin at the earliest in the State. “Other countries have already started vaccinating children; it is better to vaccinate all children between 12 and 18,” he said.

Besides, the parents of school-going children from Class I to 10 should be vaccinated on priority to prevent transmission from parents to children. A sero survey in children should be done to know what is the percentage of exposure among children, he added.