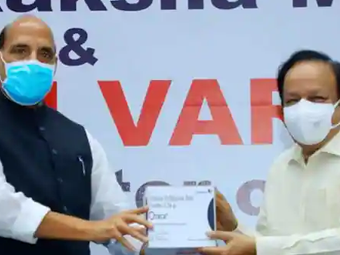 The first batch of anti-COVID drug 2-DG, developed by the Defence Research and Development Organisation (DRDO), will be released today by India’s Defence Minister Rajnath Singh and Health Minister Harsh Vardhan, officials said. The Drugs Controller General of India (DCGI) has approved the oral drug for emergency use as an adjunct therapy in moderate to severe coronavirus patients, the defence ministry said earlier this month. The officials said the first batch of the drug will be released by the two ministers at an event at the headquarters of the Defence Research and Development Organisation (DRDO) here. The ministry, on May 8, said the clinical trials of the drug, 2-deoxy-D-glucose (2-DG), showed that it helps in a faster recovery of hospitalised patients and reduces supplemental oxygen dependence.

The approval of the drug has come at a time when India is grappling with a record-breaking wave of the coronavirus pandemic that has stretched the country’s healthcare infrastructure to its limit. “In the ongoing second COVID-19 wave, a large number of patients are facing severe oxygen dependency and need hospitalisation. The drug is expected to save precious lives due to the mechanism of its operation in the infected cells. This also reduces the hospital stay of COVID-19 patients,” the ministry had said. The anti-COVID therapeutic application of the drug has been developed by the Institute of Nuclear Medicine and Allied Sciences (INMAS), a leading laboratory of the DRDO, in collaboration with Dr Reddy’s Laboratories (DRL) in Hyderabad. The drug comes in a powder form in a sachet and is taken orally by dissolving it in water, the ministry said. In efficacy trends, it said, patients treated with 2-DG showed a faster symptomatic cure than the standard of care (SoC) on various endpoints.

Meanwhile, 21 more members of the Particularly Vulnerable Tribal Group (PVTG) in Odisha were afflicted with coronavirus, taking their number to 45, official sources said on Sunday. The PVTG is a classification by the central government for tribes based on their relative physical isolation, declining population, low levels of literacy and pre- agricultural stage of economy such as hunting, food gathering and shifting cultivation. Before 2016, PVTGs were known as Primitive Tribal Groups.