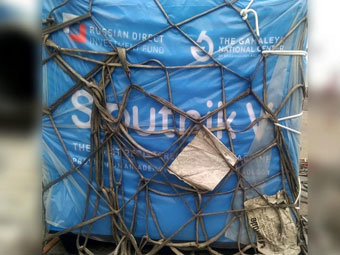 India received a shipment of Russia’s Covid-19 vaccine Sputnik V on Saturday as the first batch of 1,50,000 doses arrived in Hyderabad from Moscow. Another three million doses of the Russian vaccine are scheduled to arrive this month. The vaccines will be delivered to Dr Reddy’s Laboratories, which has joined hands with Russian Direct Investment Fund (RDIF) to produce Sputnik V in India.

Russian Ambassador to India Nikolay Kudashev tweeted, “Happy to share that the first batch of the #SputnikV vaccine delivered in Hyderabad! As #RussiaIndia continue dedicated joint efforts to combat the #COVID19, this move is especially important to support the Indian Government’s endeavors to mitigate deadly 2nd wave & save lives." The efficacy of @sputnikvaccine in among the highest in the world, and this vaccine will also be effective against new strains of #COVID19.Its local production is about to start soon and is planned to be gradually increased up to 850 million doses per year.

In a official statement, Dr Reddy’s said, “We are pleased to announce that the first consignment of 150,000 doses of the Sputnik V vaccine has landed in Hyderabad from Russia. The rollout of the consignment will be subject to the necessary clearances, which will be processed over the next few days. This initial quantity will be used across different channels as a pilot to line up our supply chain for the larger vaccination program rollout. Subsequent consignments will arrive in the next few weeks." On April 13, the Drug Controller General of India (DCGI) approved the use of Sputnik V vaccine against coronavirus in the country. India became the 60th country to approve Sputnik V.

In September 2020, Dr Reddy’s and RDIF entered into a partnership to conduct clinical trials of SputnikV, developed by the Gamaleya National Research Institute of Epidemiology and Microbiology and the rights for distribution of the first 100 million doses in India. Later, it was enhanced to 125 million.

The vaccine has been registered in India under the emergency use authorization procedure based on results of clinical trials in Russia as well as positive data of additional Phase III local clinical trials in India conducted in partnership with Dr Reddy’s Laboratories.

RDIF has reached agreements with the leading pharmaceutical companies in the country — Gland Pharma, Hetero Biopharma, Panacea Biotec, Stelis Biopharma, Virchow Biotech — aimed at the production of more than 850 million doses per year.